OldCoach wrote:Sidelion,
Which playbook were you using when you played the Redskins vs Seahawks? You know that you should use the formation sub command to put the QB in the HB2 slot on the running plays.

Here's the Straight T and some wing T in a playbook called 1950 Offense.

I like the motion pass in the T and the punt/kick block formations in the 1950's defense playbook. Haven't tested the defense against Wishbone, Flexbone, or the default Run Heavy playbook, though, but it can't be worse than the generic M08 4-3.
"Why do you go away? So that you can come back.
So that you can see the place you came from with new eyes and extra colors.
And the people there see you differently, too."
Top

I think you'll like this one also- 1968 Texas Wishbone.

This is an unfinished playbook. I'm sure you'll add to it. I call it the Wingbone. Sometimes it's referred as the Flexbone.
It's what Georgia Tech runs. Tell me what you think about it.

Austinmario,
Check on page 4 of this thread. In one of my posts, you can download a playbook I call 1950 Offense.
A few posts later I have 6-2 based playbook for the defense. My playbooks are set up for the college game.

does anyone got a playbook that uses the running back as a receiver also uses the fullback just for blocking since i always have the big 3 offensive players on the 1968 dolphins.
Top

rahien.din wrote:Here are some of the PB I had downloaded from FF 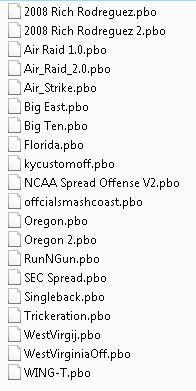 Those Oregon playbooks are fantastic so far! Just need to do a bit of tweaking to make them perfect with my fantasy franchise.

jesse100190 wrote:http://www.filedropper.com/iweapon has options QB Runs and a mix in this playbook 1st test play QB gets injured for 12 weeks

Does anyone have a mirror of this file? I'm not able to download it, I just get a link to "filedropper.com" and not the actual file. I'd love to try out those option plays!
Top

https://www.sendspace.com/file/8v16ps is Version 2 of the playbook still up vet
Top

jesse100190 wrote:https://www.sendspace.com/file/8v16ps is Version 2 of the playbook still up vet

you the real MVP

Return to “Plays and playbooks”

Users browsing this forum: No registered users and 1 guest