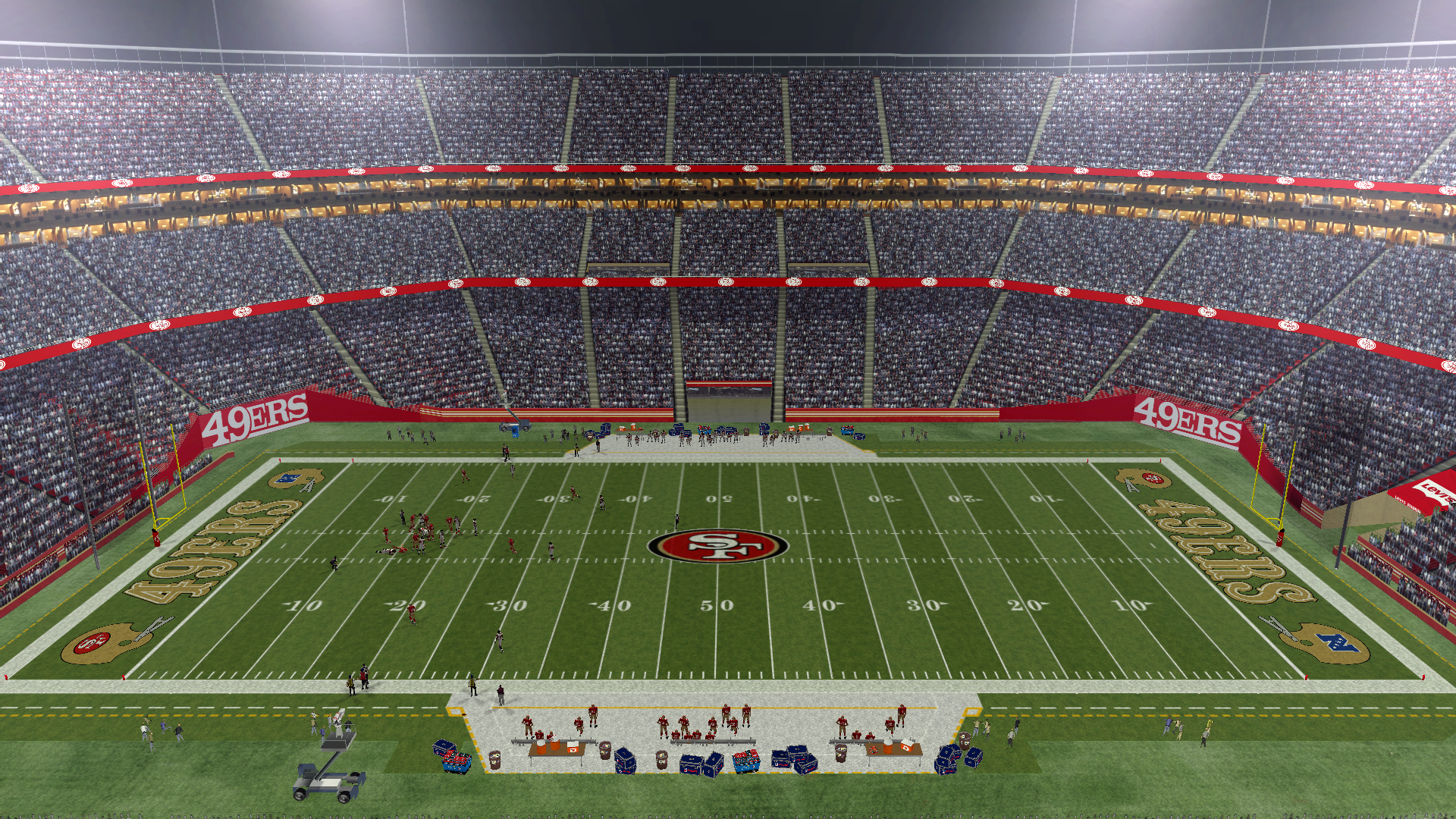 Back in 2014, I released a modded .dat version of Levi's Stadium - my first foray into the .dat editing world. The stadium has been downloaded hundreds of times and has become a permanent part of the FF/FI Mod. Several updated versions of the stadium have since been released on this forum however, it remains one of my proudest pieces of work.

In late 2016, sting released the original version of the MoRE which enabled the editing of the size, shape and presentation of fieldart. It was soon discovered that this utility could be used to edit 3D models in the game, including the holy grail - stadiums.

Between September 2017 to March 2019, I worked on what I consider to be a labour of love: a 3D update of Levi's Stadium, the one that started it all. Every single day, for a year and a half, I chipped away at this project. I never told anyone, never asked for money, and never wanted any praise. I gave the stadium to Revanfan for testing and later agreed for its release in the next FF/FI Mod.

However, the announcement that the next mod will not be released until September 2020 at the earliest means that there would be an ever further delay to the release of this project. Combined with recent events regarding the use of 3D editing technology, this did not sit well with me.

I have, therefore, decided to release Levi's Stadium - Reloaded immediately. In this package, you will find three stadium files to be inserted into slots 1537, 1541, 1545 of the stadiums.dat. You will also find a fieldart file to be inserted into slot 722 of the Fieldart.dat. All of these slots are numbered with zero based arrays unchecked.

In order to use the fieldart file, you will need to edit the STAD table of your roster or franchise so that the ST35 value for Levi's Stadium is 717 like so:

If there is sufficient interest, I may release some of the "construction photos" for this stadium as well as one (or more) other unreleased stadiums.

Thanks again to everyone for following my work all of these years. I regret if my silence on 3D editing has given the appearance that I've been hoarding stadiums or have otherwise sat on useful technology which may have advanced the editing of a 13 year old game. In my defence, I simply wanted to work this in peace, without the limelight nor the responsibility of writing a tutorial.

This project has been a huge inspiration for my recent work. I'd actually really like to see what other unreleased stadiums you've got.
"My wife passed away seven years ago, right, but the sun came up the next day, the world kept spinning and people kept going to work, and that's what we're going to do." - Mike Zimmer

I would have rushed the next mod release if I had known you wanted me to get it out soon. This is the most impressive thing in the entire mod right now if you ask me, and the mod is full of impressive work.

And actually, the stadium will be in the final 2019 update, so it'll be in the mod before September. Still, I'm glad to see you post it. You should get full recognition for your brilliant work.
My Historic Cowboys Teams - http://footballidiot.com/forum/viewtopic.php?f=12&t=240
My Cowboys Journal - http://footballidiot.com/forum/viewtopic.php?f=2&t=3610
I'm a die hard Cowboys fan and a New Yorker born and raised.
Top

Very sharp BIT, the fans in the new seating area are in for a treat!

You should be proud of your work because I still remember you as texmod guy.
About Me